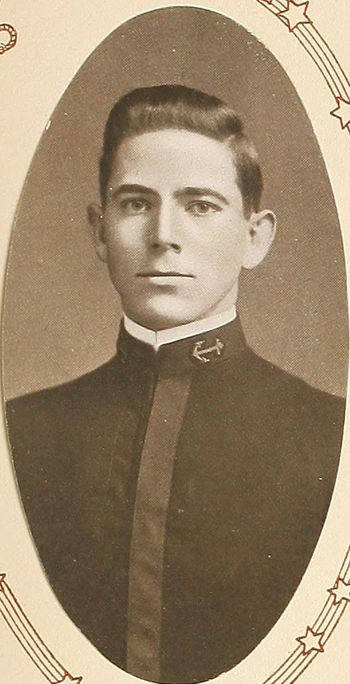 Looks like Caesar, speaks like Demosthenes. His speech at the end of first class cruise will always remain a pleasant memory. A true son of the Commonwealth of Kentucky—believes in States' Rights and upholds the Jeffersonian doctrines. Savvy and efficient. Thinks and acts for himself and wears, as a reward—a buzzard. Can quote the classics, enjoys good stories, and excels as a raconteur. Believes work has its place, but it should always be followed by a big "porterhouse steak and a bon cigare."

"Checking valuables originated on the Ark."

Looks like Caesar, speaks like Demosthenes. His speech at the end of first class cruise will always remain a pleasant memory. A true son of the Commonwealth of Kentucky—believes in States' Rights and upholds the Jeffersonian doctrines. Savvy and efficient. Thinks and acts for himself and wears, as a reward—a buzzard. Can quote the classics, enjoys good stories, and excels as a raconteur. Believes work has its place, but it should always be followed by a big "porterhouse steak and a bon cigare."

"Checking valuables originated on the Ark."

Richard was survived by his wife; he is buried in Kentucky.

LTJG Saufley, as commanding officer of a torpedo-boat USS Biddle was court martialed. He became an early Naval Aviator and was an observer on the first aircraft used in combat. He survived one crash but was killed in the line of duty while attempting to add to his impressive list of aviation records.

Richard Caswell Saufley was born on September 1, 1885 in Stanford, Kentucky to Judge Micah Chrisman and Sallie (Rowan) Saufley. He attended Stanford Academy. Following high school, he attended Centre College in Danville, Kentucky for two years. On June 11, 1904, he entered the United States Naval Academy as a Midshipman. Midshipman Saufley was Assistant Business Manager of the Lucky Bag, and member of the Hop and Class German Committees. Midshipman Saufley graduated 37 of 201 Midshipman from the Naval Academy on June 5, 1908 as a Passed Midshipman.

From July 1, 1908 to October 30, 1912, Passed Midshipman Saufley was assigned to battleship USS Kansas (BB-21). On April 25, 1911, Ensign Saufley married Helen O’Rear, daughter of Judge Edward C. O’Rear of Frankfurt, Kentucky. In December 1911, Ensign Saufley was assigned as temporary Commanding Officer of torpedo boat destroyer USS Biddle. While assigned Ensign Saufley faced court martial on charges of disobedience of orders and for not reporting to his ship. According to the charges preferred against Ensign Saufley, the latter was ordered to proceed to sea at night with the Biddle. Ensign Saufley called up Commander John Bryson Patton (USNA 1889), Commandant of the Norfolk Navy Yard, on the telephone and informed him that his vessel was not fit for sea duty; that it was unserviceable and dangerous.

According to Ensign Saufley, he was ordered to take the Biddle form the Norfolk yard to Cape Henry with supplies for a wrecked collier Sterling. He did so after he had reported the Biddle unfit for sea duty. He returned from Cape Henry and no sooner tied up than he was ordered to again to go to the capes. It was nearly night, and he called up Commander Patton and informed him that the ship was in such a bad condition he did not care to take the responsibility of risking the lives of his crew. He said he did not fear for himself.

Commander Patton refused to take the responsibility of sending Ensign Saufley out. He did offer the services of a pilot. Ensign Saufley refused and this is the basis of the charges. One of the specifications is that he was personally afraid.

Some officers of the navy department said that Ensign Saufley was justified in refusing to go to sea in an unseaworthy boat, but they held that he should have notified the Commandant of the Norfolk yard sooner than he did of the condition of his vessel.

“Not a single torpedo boat in the Navy is in condition to go to sea and stand all kinds of rough weather,” was the statement of one of the naval constructors who said that Ensign Saufley ought to be commended for refusing to go to sea at night in the “tub.”

On December 26, 1911 a court martial was convened headed by Captain John G. Quinby (USNA 1878) with Captain P. M. Rixey Jr. USMC as judge advocate. Captain Pickering, USMC was defending Ensign Saufley. The court martial convicted Ensign Saufley of failure to obey the lawful order of a superior officer and sentenced him to loss of three numbers in grade and to receive a public reprimand. The yard captain’s superior officer intervened on Ensign Saufley’s behalf so that the loss of in grade standing was remitted. The public reprimand was satisfied by a court martial order published to the service.

On June 6, 1913, Ensign Saufley was promoted to Lieutenant Junior Grade. The promotion board considered his court martial as a misunderstanding!

On November 10, 1913, LTJG Saufley was assigned to the United States Naval Academy for training in aviation in at Greenbury Point across the Severn River from the Naval Academy.

During the Mexican campaign, LTJG Saufley was attached to old battleship USS Mississippi (BB-23) which was used as the aviation station ship. LTJG Saufley acted as navigator. USS Mississippi carried two Curtis hydroplanes in the hanger on the deck of the battleship and by the time the fleet arrived off Vera Cruz the flying machines were ready for immediate use. They were lowered over the side of the ship by cranes and they scudded across the harbor to the beach under their own power.

On May 6, 1914 at 0908 after receiving and urgent message, LTJG Saufley and pilot LTJG Bellinger (USNA 1907) flew a hydroaeroplane AH-3 over Vera Cruz on the first naval combat flight. LTJG Bellinger flew the plane and LTJG Saufley rode beside him as an observer and made a chart of all the territory around Vera Cruz showing where bridges were burned, tracks torn up and where some Mexican soldiers that they flew over were throwing up entrenchments. As the aviators headed northward along the coast toward Boca del Rio Antigua at an average altitude of 3,200 feet, they flew low over a group of Mexican Army stragglers, who opened fire with their rifles and hit the fragile plane. LTJG Bellinger immediately pulled up, and he and LTJG Saufley miraculously escaped unhurt. On returning to base, the men stepped out of AH-3 and grimly inspected the bullet holes in the wings. The first damage sustained by a United States aircraft from enemy fire.

Back at Pensacola by summer of 1914, LTJG Saufley passed his examinations and became a “qualified Naval Aviator.”

In March 1915, LTJG Saufley was assigned to head the aviation school at Pensacola Florida. The fact that he shared none of the hard-drinking, hell-raising characteristics of most of this contemporaries probably was a factor in his selection over several senior officers.

On March 13, 1915, LTJG Saufley and student Ensign Edward O. McDonnell (USNA 1912) were flying an AB2 airplane when it crashed. The plane LTJG Saufley was piloting stalled. The plane whipped down in “the deadly nose dive’ and crashed into the bay. Fortunately, they happened to be only some sixty feet from the water. Neither aviator received serious injury.

On September 27, 1915, LTJG Saufley made the second successful aircraft launch from a catapult that he and LTJG Bellinger (USNA 1907) had installed on a barge.

In December 1915, LTJG Saufley made the first of a series of naval scouting flights, going sixty miles over the Gulf of Mexico. In the same month he established an altitude record of 12,135 feet.

On January 14, 1916, LTJG Saufley was ordered to maintenance shops of the Naval Aeronautic Station, Pensacola, Florida.

In March 1916, LTJG Saufley broke his own altitude record, soaring 16072 feet. This is higher than one is allowed to fly today without supplemental oxygen.

On June 9, 1916, LTJG Saufley, on an endurance flight in a Curtiss Model E hydroplane AH-9 pusher over Santa Rosa Island off Pensacola, crashed to his death after being in the air 8 hours and 51 minutes. Suddenly, the aircraft plunged vertically to the ground, the right elevator fluttered in plane's wake, until it crashed on Santa Rosa Island. With the engine in the back of the plane, LTJG Saufley’s head and chest were instantly crushed on impact. As a result of LTJG Saufley’s death the pushers never flew again in naval service.

LTJG Saufley had expressed the opinion that ninety percent of the accidents to airplanes and aviators were caused by recklessness on the part of the pilot, and he had asserted that if he were ever the victim of an accident, it would be from fault of the machine he was flying. Investigation of the plane in which he met his death showed that while it represented the last word in efficiency in that day, it contained green wood in its construction, and this green wood caused parts of the plane to break.

USS Saufley (DD 465) was named for Richard; the ship was sponsored by his widow, Helen.

Saufley Field is also named for him.

Richard's classmates erected a plaque in his honor in Memorial Hall.

Richard is one of 7 members of the Class of 1908 on Virtual Memorial Hall.

The "category" links below lead to lists of related Honorees; use them to explore further the service and sacrifice of the alumni in Memorial Hall.
Retrieved from "http://usnamemorialhall.org/index.php?title=RICHARD_C._SAUFLEY,_LTJG,_USN&oldid=131089"
Categories: