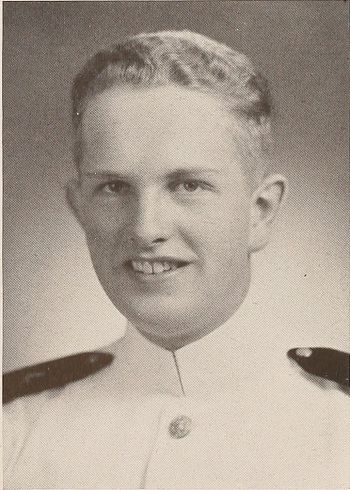 Rich was lost when his F-8 Crusader struck the ramp while landing aboard USS Midway (CVA 41) on January 20, 1966 while operating off the coast of Southern California. He is buried in California.

From the March 1966 issue of Shipmate:

LCdr. Richard H. Richardson, USN, died on 20 Jan. when the jet plane he was piloting crashed into the deck of USS MIDWAY in training operations in the Pacific near San Diego, Calif. He was executive officer of Fighter Squadron 124 at the Naval Air Station, Miramar. Services and interment were at Fort Rosecrans National Cemetery.

Cdr. Richardson, who was born in Washington, D.C. , attended Bainbridge Naval Preparatory School before entering the Naval Academy, from where he was graduated in 1951. He served as an instructor at the all-weather night fighter school at Key West, Fla., and at the Naval Officers Training School at Newport; he later attended the Naval War College. He held the Armed Forces Expeditionary Medal for Vietnam, and the Naval Occupations Medal.

He is survived by his widow, Darlyene, of 6792 Maury Dr., San Diego; two sons, Peter and Craig, and two daughters, Elizabeth and Kathleen; his mother, Mrs. Myrtle E. Richardson of Mt. Rainier, Md., and three sisters.

Richard is one of 48 members of the Class of 1951 on Virtual Memorial Hall.

The "category" links below lead to lists of related Honorees; use them to explore further the service and sacrifice of the alumni in Memorial Hall.
Retrieved from "http://usnamemorialhall.org/index.php?title=RICHARD_H._RICHARDSON,_CDR,_USN&oldid=86319"
Categories: