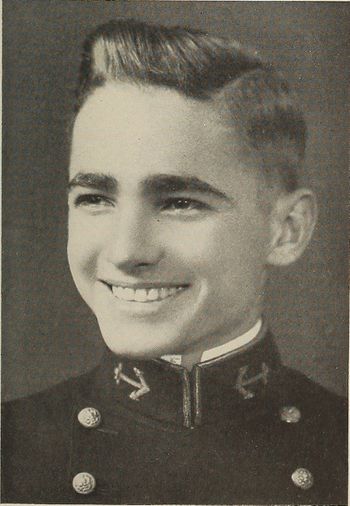 Floyd was lost when USS Monaghan (DD 354) capsized and sank during Typhoon Cobra on December 18, 1944. Only eight of her crew survived.

He had taken command less than three weeks earlier, on November 30.

Floyd, Monaghan , and the rest of the men and ships involved in Typhoon Cobra are extensively chronicled in "Down to the Sea: An Epic Story of Naval Disaster and Heroism in World War II" by Bruce Henderson.

At 8:05 A.M. on November 30, 1944, while anchored in the Ulithi lagoon, Monaghan held a brief change-of-command ceremony. Departing was Commander Waldemar Wendt, who had been in command for eleven months. Newly arriving was an officer who had graduated from Annapolis five years after Wendt: Lieutenant Commander Floyd Bruce Garrett Jr., twenty-nine, of Clarendon, Arkansas (near Little Rock), where his mother-Laura Redding Garrett, the "first female graduate of the University of Arkansas" and a lifelong teacher-still held class in a one-room schoolhouse. When, at age seventeen, he asked for permission to join the Navy, his mother initially declined in favor of his continuing his education. She changed her mind when he came home one night admittedly "skunky drunk." Deciding that the Navy might teach him some discipline, she signed the necessary papers. After a year in the fleet, the seaman 2nd class was honorably discharged "to study for the U.S. Naval Academy," which accepted him in 1934 at age nineteen. The "short, slight and boyish" Garrett-at five foot six and 115 pounds the "smallest and probably one of the youngest looking" in his class-paid attention to academics, ending up ranked 123rd in his class, which graduated 438 new ensigns in June 1938. One classmate remembered Garrett's "quiet dignity and winning smile." His biography in the Lucky Bag 1938 stated:

Small in size, but full of fight and determination, Brucie came all the way from Little Rock to learn this naval trade. He has become the most seagoing fellow in the class, and some of the yarns he spins would turn the "Old Navy" green with envy. Always ready to have a good time, but serious enough to stand well in the upper third, his knowledge of the academic side of life has made him more than helpful as a roommate. His cheerful, level point of view is always dependable. His activities have been limited to holding down the radiator and complaining about the food. Seriously, we would have been lost without him. Our suite could never be complete without Brucie's helpful, encouraging and determined companionship.

Garrett's first sea duty was aboard the aircraft carrier Ranger (CV-4), commanded by Captain John S. McCain, who would become a decorated wartime carrier admiral. After ten months on Ranger, Garrett was the subject of an exemplary fitness report written by McCain, who added: "Ensign Garrett is wide awake, energetic and capable. He is one of the finest and most promising young officers it has been my pleasure to have serve under me."

Ordered to the battleship New York (BB-34) in early 1939, Garrett made an unusual request the following year: to leave the ranks of young line officers-in training to one day command a ship, traditionally the most coveted position in the Navy-and be sent to the next session of the Navy's Finance and Supply School, and upon completing that course to be transferred to the Supply Corps. Garrett was sent to the three-month school in Philadelphia. However, shortly before graduation he asked to return to line duty following the school. Showing indecision about his career path, he soon followed that request with another: "I now request that my request for return to line duty be cancelled." Four days later, Garrett was informed by the Bureau of Navigation, which handed out assignments for the Navy's line officers, that it was "impractical to approve" his latest request. He was ordered to report to the destroyer John D. Edwards (DD-216)-an obsolete four-piper (ship with four stacks) in service since 1920-then in the Asiatic Fleet on China station, which was considered a backwater assignment but which would heat up at the outbreak of war. In February 1942, Edwards participated in the Battle of the Java Sea-up to that time the largest naval surface engagement since the Battle of Jutland in World War I-in which ten U.S. ships and four Japanese ships were sunk.

In January 1943, Garrett volunteered for ordnance engineering school "because I would like to have a class of duty wherein poor eyesight is not such a great handicap." If granted, the request likely would have resulted in his removal from lightly armored destroyers and future service in cruisers and battleships. Edwards' commanding officer, Lieutenant Commander William J. Giles Jr., although a close friend of Garrett's, disapproved the request before sending it up the chain of command because he considered Garrett's experience in destroyers too valuable to lose. Giles, who had been awarded a Silver Star for "an outstanding piece of navigation under fire" in bringing Edwards and three other destroyers safely through the treacherous Bali Strait with the enemy in pursuit during fighting in the Java Sea, explained:

Experience possessed by this officer as an actual participant in the Southwest Pacific Combat Zone during the Defense of Java, and the qualifications for the command of a destroyer, which he unquestionably now possesses, make the retention of this officer in destroyer duty practically mandatory. Although near-sighted, this defect has in no way interfered with the high standard of performance of the duties of Officer of the Deck, Gunnery Officer, Navigator, and Executive Officer, in all of which offices he has served since the outbreak of war.

Garrett's request for ordnance school was denied, and he remained second in command of Edwards until the destroyer was transferred to the Atlantic in June 1943, at which time he was ordered to the Bethlehem Steel Co. shipyard at Terminal Island, California, to become executive officer of the newly launched Fletcher-class destroyer Cowell (DD-547). That same month his wife, Virginia (Corbin), presented him with their first child and his namesake: Floyd Bruce Garrett III. Capable of "sudden and strong emotion," Garrett had met his future wife at a costume ball, where she wore a veil that hid all but her eyes, and danced with her the entire evening. The next day he wrote his mother, vowing: "I am going to marry the girl who has those eyes."

Assigned to a carrier group in the Pacific, Cowell took part in the landings at the Gilbert Islands in November 1943, and screened carriers launching air strikes at Hollandia, Kavieng, Truk, Wake Island, Guam, Iwo Jima, and elsewhere. In November 1944, facing his own rotation to a new assignment, Cowell's commanding officer, Commander Charles W. Parker, urgently wired higher authorities requesting that Garrett "be retained on board" Cowell due to his "experience and qualification for command this class destroyer." While it seemed logical to Parker that Garrett should take command of Cowell-a ship he knew well-the Navy had other plans, and Parker's request was "answered by orders" two days later detaching Garrett from Cowell to command Monaghan. Both ships were then anchored at Ulithi.

Along with James Marks of Hull, Garrett was among the first wave of young destroyer skippers from Annapolis class of 1938. As it happened, a total of five classmates within weeks of each other joined Destroyer Squadron One-composed of the seven remaining Farragut-class ships-forming up at Ulithi under the command of the "intelligent, demanding and precise" Captain Preston V. Mercer (Annapolis 1924), who looked "more like a professor" than a career naval officer but was a "thoroughly seasoned professional" about the Navy in general and "destroyers in particular." Mercer inspected each of the destroyers in his command for "watertight integrity" and found them "up to a proper standard." He made sure, too, that all his young first-time commanding officers were "very much aware of the lack of stability" of the Farragut-class destroyers.*

Within hours of assuming command, Garrett was at the conn of Monaghan patrolling around Ulithi for enemy submarines. During patrols and training exercises over the next ten days, the new skipper began to gain "the confidence and respect" of the crew for his "kind and considerate" ways of making "our duties more pleasant" whenever possible. Exuding "southern charm and personality" in dealing with officers and enlisted men alike, he also showed he knew his way around destroyers. Whatever doubts he had once harbored about ascending to command of his own ship, Bruce Garrett clearly took "great pride" in his beginning tour as a destroyer skipper.

There is more in the book about Floyd personally, professionally, and his actions before and during the typhoon.

Others at or embarked at Navy Yard, Philadelphia, Pennsylvania:

Floyd is one of 72 members of the Class of 1938 on Virtual Memorial Hall.

The "category" links below lead to lists of related Honorees; use them to explore further the service and sacrifice of the alumni in Memorial Hall.
Retrieved from "http://usnamemorialhall.org/index.php?title=FLOYD_B._GARRETT,_JR.,_LCDR,_USN&oldid=122107"
Categories: