Horace Carleton Busbey was admitted to the Naval Academy from Illinois on May 31, 1918 at age 18 years 5 months.

"Busbey, H. C." is listed in the section of the 1923 Lucky Bag titled "Down Three Double O". Some have pictures and brief updates; Horace does not. 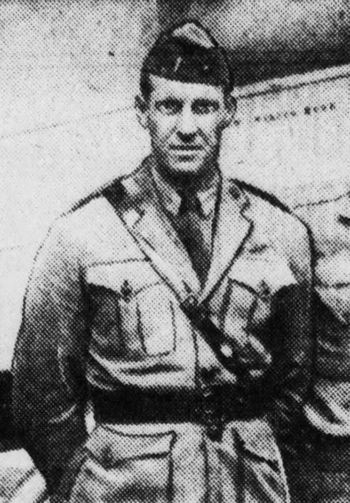 From the Evening Star on June 23, 1928. Photograph located by Kathy Franz.

Horace was lost on June 23, 1928 when the plane he was aboard crashed near File, Virginia. Also lost was Major Charles A. Lutz, who was enroute to take command of Marine Corps air forces in Nicaragua, and an enlisted crewman. A fourth crewman survived; they had departed Anacostia for Miami.

He is buried in Arlington National Cemetery with his wife, who survived him; they had no children. He was also survived by his mother, and brother RADM Leroy White Busbey, Jr '18.

Lieut. Busbey was a Washingtonian, having been born here January 11, 1900. His mother, Mrs. L. W. Busbey, resides at 900 Nineteenth street and his widow, Mrs. Rowena Busbey, lives at Pensacola, Fla. Lieut. Busbey entered the Naval Academy in June 1917, but did not complete the course.

He entered the Marines in May, 1922, serving at Quantico, Parris Island and aboard the U. S. S. Mississippi. While aboard this vessel he was commended by the Secretary of the Navy for rescuing, in September 1925, a man who had fallen overboard from the battleship Maryland.

Lieut. Busbey was commissioned a first lieutenant in January of last year, a year after he began training as an aviator. Following his graduation from Pensacola, he was detailed to Quantico and was a squadron commander at the time he was selected by Maj. Lutz to go along on the flight as assistant pilot. Lieut. Busbey was to have served a tour of "foreign duty" in Nicaragua. The lieutenant's specialty in the Marine Corps was aerological work.

Eighteen enlisted men of the Marine Corps and twelve graduates of distinguished military colleges have been confirmed by the Senate for appointment as probationary second lieutenants in the Marine Corps, and commissions were sent out to them this week. One of the enlisted men is Horace C. Busby, who at one time belonged to the Naval Academy class of 1923 and for whom special legislation was put through Congress to permit his appointment as a second lieutenant in advance of the graduation of that class.

His father, L. White Busbey, was personal secretary to the Speaker of the House, Joseph Cannon, and secretary of the International Joint Commission in 1913. He also authored two books.

Horace is one of 25 members of the Class of 1923 on Virtual Memorial Hall.

Retrieved from "http://usnamemorialhall.org/index.php?title=HORACE_C._BUSBEY,_1LT,_USMC&oldid=116269"
Categories:
Hidden categories:
This page was last modified at 14:25 on 24 April 2020.
About USNA Virtual Memorial Hall